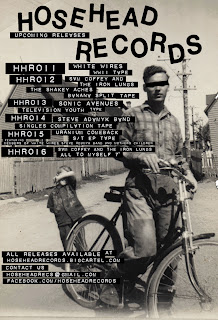 If you can't read the small text under HHR015, it says "featuring members of White Wires, Steve Adamyk Band and Mother's Children".
Posted by Hosehead Records at 18:57 No comments:

Just a headsup that I added our two newest tapes to the webstore. White Wires - WWII (/100), and Sam Coffey and the Iron Lungs/The Shakey Aches - Banana Split (/100). We also made 20 HHR shirts with a rip off of the album art from the first White Wires record. Check that shit out.

Up next: Sonic Avenues - Television Youth (/100)
Posted by Hosehead Records at 12:43 No comments:

So here we are. Our first update of 2012. Thanks to everyone who has stuck with us until this point. We have almost all the pieces to release our next three tapes (HHR011-013), we're just waiting on a batch of Hosehead tshirts to release with the White Wires tape.

Due to a delay to do with the vinyl test pressings, the LP version of Sonic Avenues - Television Youth has been delayed until January 31st, so the tape has as well.

Hopefully the White Wires and Sam Coffey/Shakey Aches tapes will be up in the store and for sale later this week. We also just got a new batch of stickers to go out with orders!

Posted by Hosehead Records at 22:18 No comments: